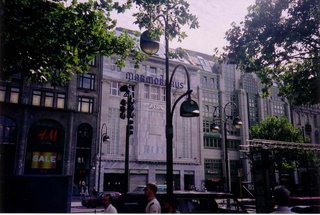 The Kurfurstendamm is Berlin's most popular fashionable street, with exclusive shops and restaurants. In my book, Season of Iron, the Eisenbaums, a Jewish family, run a store in the 1930s which sells exclusive undershirts and underwear. It lies just off the Kurfurstendamm.
Posted by Sylvia Maultash Warsh at 11:09 PM No comments: 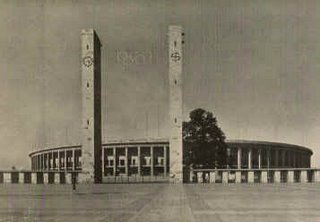 This shows the Olympic Stadium in Berlin that the Nazis built for the 1936 Olympics.
Posted by Sylvia Maultash Warsh at 11:04 PM No comments:

The Olympic Stadium in Berlin 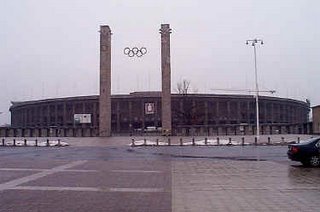 This is the Olympic Stadium in Berlin as it looks today. The stadium was built by the Nazi government for the 1936 Olympics held in Berlin. In my new book, Season of Iron, Frederika Eisenbaum has the unique opportunity, for a Jew, to attend the women's foil fencing match at the 1936 Olympics. The three medal winners were all part-Jewish.
Posted by Sylvia Maultash Warsh at 10:47 PM No comments:

My new book, Season of Iron, will be published in May 2006. In this 3rd in the Dr. Rebecca Temple series, she tries to help a homeless woman in Toronto in 1979. When the woman is killed, Rebecca finds that nobody is who they appear to be, from a German fencing instructor to an Egyptian physician developing a drug from snake venom. Alternating chapters follow a Jewish family, the Eisenbaums, in 1930s Berlin during the Nazi rise to power. The youngest, Frederika, becomes a doctor against all odds, but as the Nazi grip tightens around the Jews, she loses the right to practice, and is finally sent to a concentration camp. Rebecca’s and Frederika’s stories connect in a startling conclusion.
Posted by Sylvia Maultash Warsh at 9:45 PM 1 comment: